Help this game reach its goal

A downloadable game for Windows

It's said that somewhere, hidden from all but the most determined explorers, there is a miniature world where one may go to escape the worries of life. After falling from the sky, you've found yourself in that very same miniature world. But now that you're there, can you ever return home again?

Snorri, the resident Wizard of the miniature world, has told you of a mysterious Tower in the Sky above his shop. Perhaps if you can collect enough Gems, you can reach the Tower, and with any luck, get back home!

Elephantasy is a small exploratory puzzle-platforming game where you play as a tiny Elephant trying to get back to their home. Collect hidden Gems to raise your Rank, borrow Items from Snorri the Wizard, explore a vast and varied pixel-art world, meet a colourful cast of characters, and more! While exploring the miniature world, you'll discover a wide array of unique rooms and puzzles to solve using your Items, all of which give you various abilities; grow vines to reach high places, dash over seemingly bottomless pits, dive into uncharted waters, and lift the heaviest obstacles with ease! But beware; there are also strange and powerful beings in this magical world, many of whom won't give up their Gems willingly! It'll take all of your abilities, wits, and skill to gather enough Gems to reach the Tower!

In order to download this game you must purchase it at or above the minimum price of $1.99 USD. Your purchase comes with a Steam key. You will get access to the following files:

i think i'm done with a 31/36 gems found. it was a lovely game but i can't find any guides online and the final 5 gems feel like they're way beyond my patience.  spoilers below, feel free to reply with spoilers if you know the path thru my struggles and wanna drop hints or solutions or even just to commiserate if you're stuck at these parts, too:

i found my way to the mimic chest and the dragon boss, but there is nothing there to teach me what i'm supposed to do. i can dodge their attacks, bounce the chest off my head, or drop the falling platform on to the dragon's head all i want, but it feels like i'm in an infinite loop. idk what i'm supposed to do in these situations, super frustrating.

the moles bothered me, too. i'm told they're shy, so i've gotta wait around for them to appear in the correct location. one of the hints is "near the factory gate". this one feels like the easiest hint to me, so i rush to the room called 'factory gate'. i wait around in 3 different spots in this room until my character falls asleep. nothing. i wait until i fall asleep in the two adjacent rooms, because maybe near means next to instead of in the 'factory gate' room. nothing. super frustrating. i give up on the moles because if i can't figure out what feels like the easiest hint, i see no point in attempting the others.

according to the node map in the ice cave by the weird pot, there's 7 rooms in the grid that don't exist/aren't enterable: a 2x2 group of four in the top left, and a line of three in the middle bottom. assuming these will always be empty on the map, there are only 6 rooms i haven't entered: one on the far right closer to the top, one on the far left in the middle, and a backwards L shape near the dragon boss. none of the rooms adjacent to any of these have an opening in the node wall to indicate an entrance, so i'm assuming they're only accessible by some sorta secret? the one on the far left is marked on the weird pot map, so i'm assuming it's enterable somehow. this is a little less frustrating than the bits i talked about above because i don't feel stupid about it, like there's something obvious that i'm supposed to get that i'm missing. instead i just feel like i don't have enough patience or wit to puzzle out these zones, which is fine. i never figured out what to do with the arrows from the room named "illegible" next to the lantern, so that probably factors in somehow. i think a flame buddy said there was another code somewhere else, and each code gets entered at the site of the other? i never found another code though :(

all that aside this was a super charming game. the way there's no music in the beginning and you have to puzzle out how to grab the radio is super cool and sets an eerie vibe. i like how you have the option to NOT pick up the radio after loading a save if you want to return to musiclessness.

i love the weird voxelly world map. it almost has a claymation vibe to it.

there are a lot of charming moments in npc dialogue and with level design or room titles. quirky and cute :- )

ty for making and sharing!!!!

Wonderful, wonderful game! The perfect game to spend a sunday afternoon. I didn't get all the gems, but I had fun finding some of the more hidden ones and encountering the bosses.

I like that there is no combat (beyond the boss fights) because that's usually what puts me off this kind of games. The game speed option is also a welcome addition! I probably wouldn't have bothered to find all the underwater secrets without it.

All in all a great experience. Thank you for making it!

A frankly wonderfull game who made my day and my week and, overall, my end of the year ! Like, it's small, kind and elegant (and elephant). I love the fact that most of the gameplay is base on exploration, on going back on place with new knowledge and item, but also with hint from different character or wooden planch !

I loved the completionnist part, mostly because of the way you disperse the hint in the world, and the secret room feel awesome to find !

I still have some trouble with the lack of feedback on 2 of the optionnal boss (spoiler : the chest and the dragon) like, I didn't know if what I was trying was the right answer or not. The third optionnal boss have some feedback, so it's pretty clear when I'm on the right way, but for the other two, it's a far less clear.

I played on steam (but I repay the game here because I loved it too much xD) and I also want to say that the achievement help me a lot to reach the 100% (it also clarify the info of the mole being "get" because, else, it was pretty weird to just see the mole go away. But the rewards was really worth it and elegant !

The whole game work so well, I really love it ! Thanks for making this game !

I had a lot of fun 100%ing this. I'm not usually a completionist but it was easy and rewarding to explore one bite-sized chunk at a time, especially with how many secrets were crammed into each corner of the map.

It took me about 5 hours to complete without a guide, although I wish I had noticed the game speed modifier before I won - exploration demands backtracking and retreading the same couple of rooms can get a little tedious at the 1x speed.

Some SPOILER-HEAVY thoughts and minor bugs -

I tend to explore in depth before I explore broadly and so I was able to rise to ranks 2 and 3 having barely scratched the surface of some places. Once you can carry three items at once, item-shuffling becomes kind of trivialized - either you're going somewhere you expect to swim or somewhere you expect to run, but rarely both. That's not against the design of the game but I will say I don't think that the item swapping was a big part of my experience after the first hour or two.

I thought the mole puzzle was a little confusing - it wasn't very clear to me that, upon them simply appearing, I had done everything I needed to do. I thought it was a bug that they wouldn't reappear or that I couldn't get them to show up while I was close enough to talk. I'm not even sure where I saw the factory entrance mole, and I don't think I was close enough to the pillar mole to for it to be visible when it appeared. My expectation was that I would have to speak to them; I only completed the mission accidentally by returning to the mole room to reread the dialogue. The reward for that was nice, although, as the very last thing I managed to do in the game, a little useless - but you can't really prevent that.

The other puzzle I walked away from with a slightly sour taste was the effigy puzzle. It's not that the solution didn't make sense, but the True Key room you go through to get there had some (I think unique) statues that really threw me off. I left the area and did the whole magic pot journey all over again just to be sure I was recreating those exactly! I liked the actual effigy, I just felt that that was an unintended red herring (at least for me).

I found it slightly annoying that the map button defaulted to showing me the 3D world map. I liked that perspective, I think it helped make the game feel like a comprehensive world instead of a bunch of stitched-together rooms, but 99% of the time I was hitting tab because I wanted to check where I was and where I was going on a room-by-room basis.

I really enjoyed the little stuff hidden in out-of-the-way places for map completionists like myself to find. The weird little creature in the sky with coffee was great, as was the hint guy's lair.

I also thought the magic pot areas were a neat concept. I've only played the version where the patched-in hint was present (was it the snow guy dialogue? the map?) but it added a fun puzzle to retracing your steps to already fairly out-of-the-way places. I liked the flavor of them being mostly "special" places - shrines and such. Full disclosure, I superimposed the hint map over the tab-menu map in an image editing tool, but this is the kind of game where taking notes is hardly cheating.

There were a handful of small bugs I ran into -

Anyway, I really enjoyed this, enough to write up a small essay of thoughts and feedback. Of course I wouldn't expect you to change it post-release based on a rando itch comment but I like to ramble when my brain's been this deep in a game.

Looking forward to what you make next!

Thank you for the detailed analysis, and for alerting me to the bugs! I'll patch out the more glaring ones (if I can figure them out anyway).

I'm also glad that you liked the game enough to stick around and 100% it, even despite the issues! I dunno if I'll act on the broader feedback (particularly the design decision stuff, since it feels a bit late to be going back on that stuff now) but we'll see! The 3D map thing in particular has been noted by one or two other folks, so I'll certainly consider switching the default option in a future update (or apply some other fix, if I can think of anything more clever).

Of course you shouldn't overhaul anything at the design level at this stage! I don't even think the issues are that big of a deal, I just wanted to share my thoughts.

Thank you very much! 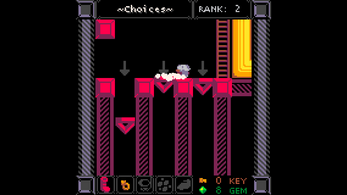 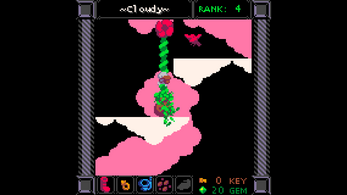 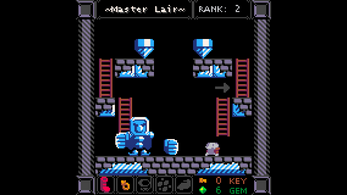 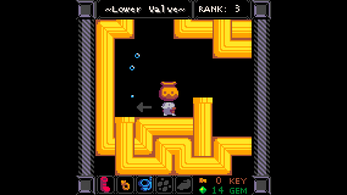 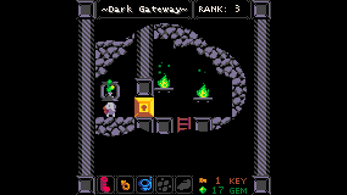 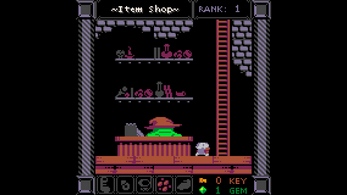